Jonny
Industry News
BACK TO BLOG

Modular construction is a hot topic for many property professionals. Some love it. Some less so.

But what does it actually mean for the industry?

First, let’s start at the beginning.

What is modular construction? 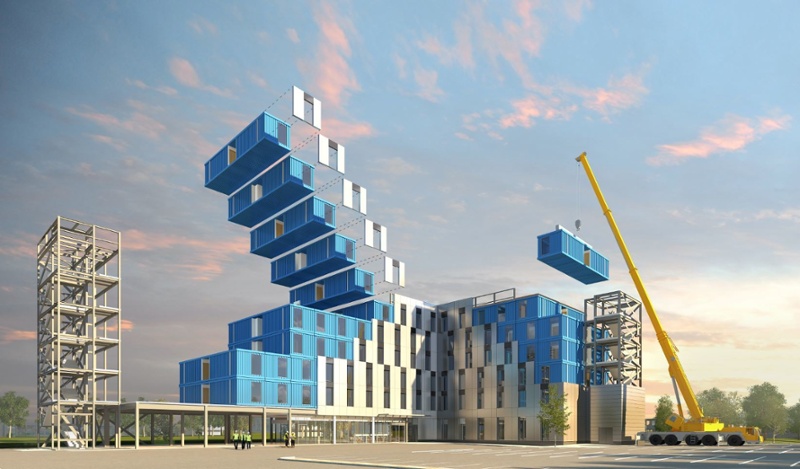 Instead of building on site from start to finish like traditional construction, modular construction allows for some (or even all) of the building to be constructed off site. Then these modules can be shipped wherever they’re needed and assembled quickly and easily.

For example, imagine a budget hotel. All the rooms are identical wherever you go in the country. That uniformity is a benefit. They’re familiar – guests know what they’re getting.

Modular construction lets you build and decorate all the rooms in exactly the same way. And you can do so in a central factory – at scale. Then the rooms can be shipped around the country whenever a hotel is built or expanded.

And it offers huge economies of scale.

That means it can be cheaper, safer, and cause less disruption (noise, pollution, traffic etc.) around what would otherwise be a huge construction site.

Modular construction isn’t as new an idea as some people might think.

In post-war Britain, modular construction was a huge part of everyday life. It was the only way to rebuild enough infrastructure and housing to keep the population safe.

Only, it went by another name then – “prefab” housing.

Even now, “prefab” has certain connotations, usually around being cheaper and not built to last. And this reputation almost killed modular construction.

The few projects that did tick along were mostly out of necessity. They were seen as a quick fix until “proper” housing could be built instead.

The Egan Report and the rise of tech

In 1998 Sir John Egan completed a report into the construction industry in the UK, Rethinking Construction.

His findings included that:

“Projects are widely seen as unpredictable in terms of delivery on time, within budget and to the standards of quality expected”

He made some suggestions to modernise construction. He wanted to bring more of an assembly-line mentality (which, having worked in the automobile industry for most of his career, is perhaps unsurprising).

One of his suggestions was, you guessed it, modular construction.

In fact, he gave an example of how it was being used to good effect:

“McDonald’s Restaurants have demonstrated an ability to construct a fully-functioning restaurant on site in 24 hours, using a very high degree of prefabrication and modularisation.”

The Egan Report was released over 20 years ago. But it seems the lesson is slowly creeping into the market.

The realities of modular construction

Of course, modular construction won’t be right for all property developers.

To get a real insider’s view on how (or indeed if) modular construction can help SME developers, we asked our good friends over at C-Link:

"The greatest benefits of modular construction are time and cost reductions – but these benefits only come when you purchase at scale. For most SME developers working on smaller schemes, the switch from a traditional construction model to modular rarely works.

Modular construction is also better suited to schemes where the standardisation of layouts and specification is easy to achieve. If you have a development situated in a tight inner-city site with neighbouring properties either side, you’ll require a bespoke design to make the project financially viable. On a large scale, modular design could achieve this, but for an SME developer, it’s almost impossible to deliver profitable inner-city developments with modular construction.

So modular construction is by no means a solution to all the property industry’s woes. But it's a damn sight better than it used to be.

Modular construction is definitely no longer the ‘low budget’ alternative it used to be. In fact, I recently read about a startup in the Philippines that offers designer modular and Google have invested in an end-to-end property building company who are trying to rethink construction entirely.

The topic of modular construction came up at our Future of Residential Development Roundtable. What did the experts there have to say?

Well far from being low budget, they thought that the ability to control and ensure the quality of every aspect could actually mean that modular construction could charge a premium. In fact, you can have a look at exactly what they had to say below: Fill the form for a free trial of LandInsight:

If modular construction follows similar patterns to other products that start niche before hitting the mainstream, then they could be a great way of bringing some much-needed innovation to the housing crisis.

The future of modular construction: my prediction

Modular construction has a lot of potential. In fact, there’s a good chance that we could start thinking of our houses in the same way we think of our phones.

That means that even though your phone is an off-the-line model, the end result is something that’s uniquely yours.

And your house could be the same. With your house:

In fact, the perfect system could combine the phone and the house – letting you manage your home through a simple app.

Imagine being able to click to order another bedroom if there’s a new arrival to the family. Or adding a garage when you buy a second car. Or swapping out your bathroom for a new one instead of the costly time to redecorate it...

New tech unlocks some incredible possibilities. And so far, we’re barely scratching the surface of how it can literally impact the way we live.